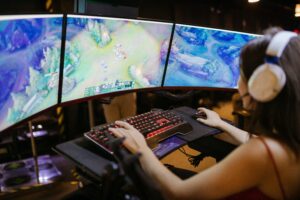 Photo by RODNAE Productions from Pexels

Gaming and gaming viewership is on the rise. Twitch, a major broadcasting platform for gaming, has reported an 86% increase in viewership since January of 2020, with several days where viewership has surpassed 6 million people. This shouldn’t come as a surprise, either: in 2021, 227 million Americans played video games.

Contrary to popular belief, it’s not just Gen-Z men who are gaming. Data from the U.K. suggests that more women are getting into gaming and gaming streams and that more mature audiences are also playing and watching games on mobiles, PCs, and consoles. Many view gaming as the new social media and gaming viewership/consumption now rivals the TV and film industries. It’s not too late to benefit from a first-mover advantage in the gaming industry, but it can be hard to know where you should begin.

There are a few ways you can invest some of your marketing spend into gaming. In-game advertising helps you spread your message to targeted demographics by utilizing simple SEO analytics. Alternatively, sponsoring streams and eSports athletes can help your overall business exposure through events watched live by millions. With that in mind, just a little research and foresight can help you navigate the volatile but rewarding gaming industry.

The traditional route for advertising in gaming is to post in-game advertisements (IGA). IGA works particularly well for games where players use their phones to play, as audiences can simply click an embedded URL link and go directly to your website. You’re probably familiar with this kind of advertising, where an advert appears after a round of Candy Crush or banner adverts are displayed between matches of online Chess.

The key to a great IGA campaign is in selecting the appropriate game for your target audience. However, the good thing about IGA is that you already know who will see your adverts before you place them. That’s because game developers are able to accurately record their download demographics and can paint a clear picture of their player base. This allows you to target games with player bases that are typically interested in your product/service, and means you have built-in ad relevance.

Fifty percent of gamers also watch gaming streams, and eSports sponsorship spending is set to surpass $1 billion by 2022. Advertisers who are new to eSports, streaming, and sponsorships might be daunted by the sheer volume of those numbers, and it can be tough to know how to connect with your target audience. To break it down, it’s worth understanding a little about the “who,” “where,” and “how” of gaming sponsorships in 2021.

If you’re not gaming savvy, you might imagine all streamers are ages 18-20, still live with their parents, and are high-risk investments. However, if you spend some time browsing streaming platforms, you will find highly professional, presenter-like streamers who engage well with their audiences and are incredibly consistent in their offering.

In addition, streamers have an accurate idea of who their target audience is, as live viewership analytics are tracked when folks sign up to view the stream. This means you can be strategic when selecting a streamer to sponsor. For example, if you have a product that appeals to older audiences, you might want to look for a streamer who plays single-player, narrative-based games. However, if you have a product or service that is for folks under 20, then you’ll likely want to look for streamers who play games like Call of Duty or Fortnite.

The biggest platforms for streaming games are Twitch, YouTube, and Facebook. Each of these platforms carries big-name gamers, and they are always looking to run advertisements alongside streamer’s sponsored content. Twitch, YouTube, and Facebook will also ramp up their efforts when a new game is released or a community event is upcoming. For example, when Activision ran its yearly Call of Duty League: Championship Weekend earlier this year, viewership peaked at 331K, and 1,420,000 people have watched repeats of the tournament since it aired live on YouTube (according to the YouTube page as of this writing).

With this in mind, you need to be aware of upcoming tournaments/new game releases, and adjust your marketing plan accordingly. For example, if you know your eSports team is coming up to a big tournament, you should leverage that fact in your favor. Or, if you are marketing headphones and a first-person shooter is released, then you should sponsor a top streamer to wear your headphones during the release event.

However, you still need to ensure that sponsorship is relevant to your business if you want to see impressions turn into conversions. That can be tricky if it’s your first foray into the gaming landscape, and so getting help with the “how” is vital.

There are a few different ways you can successfully sponsor streams and eSports athletes. The easiest route to finding a good streamer for your product or service is to go through agencies like PowerSpike or HelloGamers. These sites leverage the data they collect from streams across platforms and utilize artificial intelligence to locate streamers who are low-risk, high-reward options for your business. Based on analytics and your budget, these agencies will recommend streamers to you and will have you work with them to build authentic and effective marketing strategies.

Timely and strategic digital marketing is vital throughout your product’s or service’s lifecycle. If you’re launching a new product, connecting with a streamer who uses the product on-stream might be a great way to gain interest. If your service is well established and targeted towards more mature audiences, then partner with streamers who play games like CS:GO and League of Legends. Ultimately, taking advantage of the video-game boom doesn’t mean you have to entirely revise the digital marketing toolbox, you just need to do your research and ensure you connect with the right developers and streamers for your business.

MarketingProfs has published a new episode of the Marketing Smarts podcast ‘How to Generate High-Quality Traffic That Turns Into Leads and Sales: Brian Dean on Marketing Smarts’ featuring Brian Dean. says, “Even in the face of the proliferation of podcasts, video, and interactive content, Brian Dean is still a fan of the good old blog […]

High-quality content, mobile-first strategy, page experience, page speed, and on-page optimization are some top-ranking factors. Search Engine Journal contributor Matt G. Southern has published an article explaining the importance of title tags in Google search results. He says, “Google unquestionably uses the HTML title tag to understand what pages are about so it can rank […]

Closing a site indicates that the site is no longer in use and can eventually be deleted according to a schedule. Search Engine Journal contributor Matt G. Southern has shared five ways to prepare for a site closure. He says, “More detail about these recommendations and how to deal with the negative impact of taking […]

Will Google Penalize Sites That Look the Same? [Answered]

When it comes to Google search rankings, we need to consider several factors that affect performance. Search Engine Journal contributor Roger Montti has published an article answering the question on whether Google penalizes sites with the same look. He says, “Google’s John Mueller answered the question if Google penalizes sites that are nearly identical. Mueller […]