VidScripto creates video transcripts, translates them to any language #ad

As you may know, YouTube, by default, allows you to use one of its videos on your website. The video creator can prohibit this, but most videos are available for you.

There are many apps and plugins that assist in setting this up on your site. But they all have a major limitation, the video is in the original language only.

But that overlooks a far larger audience than you can address with only your original language. For example, the United States alone has the second largest Spanish-speaking population in the world, after Mexico. And with nearly 900 million Chinese, 400 million Spanish, 240 million Arabic, 170 million Portuguese, and 150 million French, and so many other language speakers online, you are missing a big chunk of traffic to your videos & sites.

Wouldn’t it he helpful if you could use a video originally in English and, translate it into the [different] language (or languages, plural) spoken by your target audience?

And, while we are at it, it would be helpful if the translation could be:
• In the spoken narration
• In translated subtitles,
• Printed as a transcript

And, for good measure, how about modifying the size and shape to match the varying requirements of the social media where you want to post it? 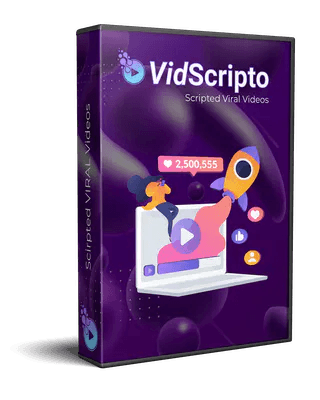 That’s why VidScripto Pro was born.

It is a First of its Kind AI-powered app that automatically transcribes, captions, and adds a voice-over to any video, so that you get more followers, likes, comments, shares, leads, and paying clients.

It creates transcripts in 32 languages, does voice-overs in 30 languages, and creates subtitles in a whopping 74 languages (see which ones, here: VidScripto Languages

And, it’s flexible:
• It can create and post existing viral videos in different languages on Social Media to engage viewers to take action.
• It can create transcribed, translated and foreign language speech for any video on any website in any niche.

How to use VidScripto to build your business

✓ Use the translated videos on your website or social media
✓ Turn the translated text (you get a transcript) into a document or video to use as a lead magnet.
✓ Use the transcript to record the message in your own voice
✓ Easily convert videos into blog posts, podcasts, audio books, or e-books.
✓ Set up a business in transcription and translation

We have arranged for a useful collection of bonuses, shown here: VidScripto Bonuses.

The launch introductory pricing structure ends on April 12 at midnight. Until then, the price will be gradually rising. It has already risen in price 3 times.

So, there’s no time to waste. For the best price, go here now: VidScripto Pro.